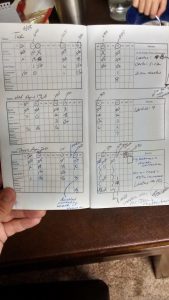 I write this in the hope of helping someone who may be facing the same thing with their child; steroid-induced diabetes. To make a long story very short, my daughter was diagnosed with Acute Lymphoblastic Leukemia less than two months ago, and as part of her treatment she has been on dexamethasone, a steroid. Unfortunately, she was one of the rare children that the steroids have been wreaking havoc on her blood sugars, even though she otherwise is not a diabetic. So, as if an ALL diagnosis wasn’t enough, we also had to learn blood sugar monitoring, insulin dosing and shots, carb counting, and dealing with the emotions of having to do all this with a five-year-old.

I had a very hard time finding information online from people who have gone through a similar thing, and I was frustrated that the doctors didn’t know when or if the diabetes would go away. But now that we have ended our first thirty days of steroid treatment, I can tell you that it did completely go away! Her blood sugars are totally back to normal when she is not on steroids!

This all “started” about two weeks after my daughter started on dexamethasone. She was taking 2.4 mL twice a day. I had noticed she had been having a lot of headaches, and she was super irritated by noise. Overall, she was not herself at all, and feeling miserable. But being we had just started chemo treatments, I assumed she was tired and not feeling well from that.

Then the increased thirst and urination started, which is textbook diabetes symptoms. She was waking up several times in the middle of the night to chug water and use the bathroom.

I mentioned it at our clinic visit a couple of days later, and they ran a BMP, which revealed her blood sugar level was 727! I almost fell off my chair! I have a lab background, and know very well what that number meant. No wonder she had been feeling awful!

After my doctor reassured me and told me not to beat myself up over it, we were admitted to the hospital for 2 nights, in which they started insulin injections and education for us. We were looking at another two weeks of steroids, so we had to learn the in-and-outs of how to manage diabetes.

If you are going through this yourself (or with your child), you know how awful it really is. How do you tell a 5-year-old, who their whole life have been able to eat what they want, when they want, that they now need shots before they eat, before they go to bed, and get their fingers poked several times a day, and “no, you can’t eat that sugary snack right now.” It literally has been the hardest part of this ALL stuff to deal with.

Even with the insulin, my daughter’s blood sugars rarely dipped below 200, despite continual increases in insulin doses and changes to her correction scale and carb ratio. It would swing between 200 to almost 500, and the insulin never really seemed to be able to knock it down. It was so frustrating!

The endocrinologist did tests for Type I diabetes just to make sure my daughter didn’t have it and the steroids just helped it surface. Lucky for us, she is not truly a Type I diabetic, so her blood sugars were purely from the steroids alone. We were so happy to know that once the steroids were stopped, she would eventually get back off of the insulin.

But how long would it take? No one really knew. Which was so frustrating. But the endocrinologists came up with a plan to get us off of insulin after the steroids were ended. It was a slow, weaning process, which still involved many blood sugar checks and insulin.

It took eight days for my daughter to get back to her normal blood sugars, which meant no more insulin injections! It felt like I’d won the lottery!

Going forward, my daughter will have several week-long steroid treatments. The oncologists were hoping she wouldn’t need insulin again because she is taking smaller courses of steroids (a week at a time as opposed to thirty days straight). But, unfortunately, just a single dose of steroids brought her fasting blood sugar from the 80s to 127. So it looks like we’ll need to be on insulin, even for these shorter steroid bursts. But it definitely shouldn’t get back up to 700 again! Or even 400. And now we have the tools and know-how to take care of it before it gets out of control.

Not that it’s fun. Or easy.

But if your child is going through steroid-induced diabetes, and you know they aren’t truly a diabetic otherwise, rest assured that it will go away! Insulin won’t be a part of your lives forever. It may take several days after the last steroid dose, but it will get better!

Some of the links in the post above may be “affiliate links.” This means if you click on the link and purchase the item, I will receive an affiliate commission. Regardless, I only recommend products or services I use personally and believe will add value to my readers.

This site uses Akismet to reduce spam. Learn how your comment data is processed.